The Prepper Insider is reader-supported. When you buy through links on our site, we may earn an affiliate commission.

Suppose you are concealed behind a tree to hunt the deer that is grazing grass at a distance of 400 yards or more, then will your rifle alone be enough to shoot the target? Obviously, there are strong chances that you miss the aim from such a distant point, no matter how skillful you are.

Here, scopes come into action. Scopes help us in locating the game or any targeted object precisely from farther positions. So, if you are in search of functional 1-8x scopes for your hunting, sporting, and military activities, then read our unbiased review on the best 1-8x scopes.

Towards the end, the article will cover a comparison overview of 6x and 8x scopes, making it easy for you to understand the worth of miscellaneous products on the market.

At a Glance: Our Top Picks for 1-8x Scopes

Comparison of the Best 1-8x Scopes

1-8x scopes are necessary for on-point shooting. Hunters always include scopes in their hunting gear. This section is intended to explicitly describe the purpose of using a scope and how it is useful for us. Hunting animals without going closer and them noticing us is no less than a challenge. Some animals are able to sense your presence from 100 yards; hence you are compelled to stay away from them. But acquiring the right aim from such a long distance is tricky.

In these situations, the need for a scope arises. 1-8x scopes allow you to increase magnification, aim at the desired spot, and release a well-judged shot every time. 1-8x scopes would be an appropriate pick for a maximum of 300-800 yards.

Aim at Nearby Targets

8x magnification would not be ideal for approaching short-ranged objects, as doing so can affect the clarity and field of view. As an 8x scope enables you to deliver an accurate shot for a far-located object. Likewise, you can zoom in for the objects close to you by reducing its magnification to 1x.

Good for Still as Well as Moving Targets

Since a smaller magnification scope offers a maximum field of view, which can cope with the speed of a moving game, it is recommended for targets in motion. On the other hand, we zoom in to the fullest for a still target to hit it on point. Thus, a 1-8x scope serves in both conditions as needed.

Review of the Best 1-8x Scopes

Having so many options on the market, laying hands on the best 1-8x scopes is not that easy. But we are here to help you pick a product most suitable for your needs and desires. Below, we have enlisted and reviewed top 1-8x scopes that would prove to be as functional as you want one for yourself.

Customers have become fans of this 1-8x scope. The majority of them reported that its clarity and zoomed view were outstanding. We found many buyers recommending it to others. Some people felt that the product is not as lightweight as it should be. In spite of that, people appreciated its overall performance.

Composed with the first focal plane, this scope encompasses both MOA and MIL segmented reticles. These reticles ensure accuracy and ease of use. Moreover, the scope is equipped with a long-running, CR2032 Lithium battery that illuminates the reticle with red color.

The battery has excellent potential and claims to live for up to 31 hours. In case it runs out, the reticles still stay on the view but in black.

The scope boasts a durable construction, which includes aircraft-grade aluminum that is well-known for its anti-corrosive and strong mechanical properties. Hence, it goes a long way.

After acknowledging the features, we can conclude that this scope is a wonderful option for hunters who usually require observing an undistorted view of the game standing at a range of 800 yards. Therefore, adding this to your hunting backpack would be a wise decision. 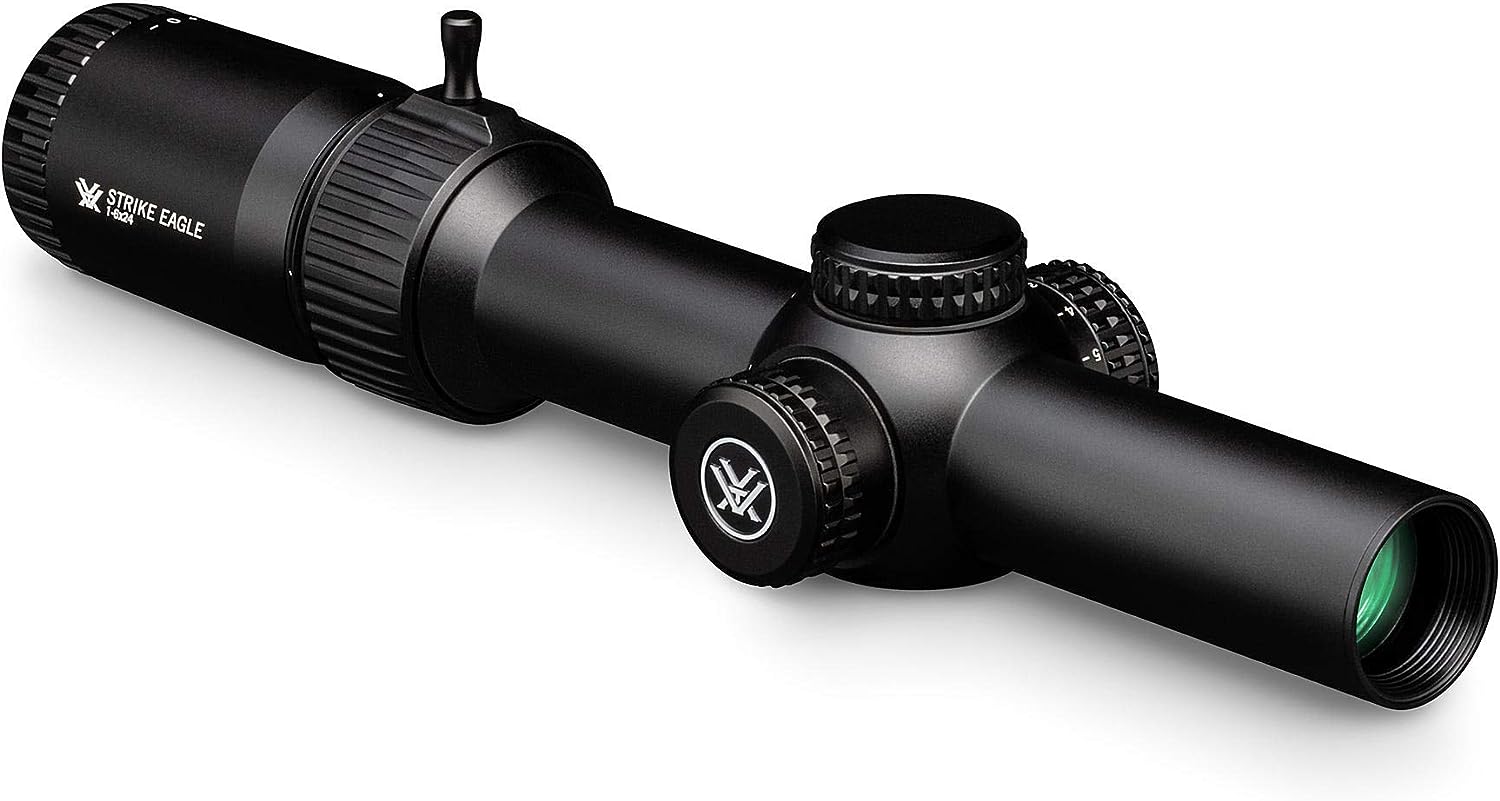 People are satisfied with their purchase. Some of them were so impressed by the performance of the scope, especially the glass clarity, that they decided to gift it to their loved ones. Buyers had no issue with the product, and they reported that it was a great experience using it.

This six-power scope entails a BDC illuminated reticle that comes with eleven flexible settings. Although it is an SFP scope, the design includes a unique configuration, according to which the reticle stands behind the image erecting. As a result, its size remains unchanged no matter how high the magnification goes.

The lens, being multi-coated, tends to resist fog, water, and shock damages quite effectively. Furthermore, there is space in the windage cap dedicated to keeping an additional battery, which can help you when the scope runs short of its primary battery.

One more thing which deserves your appreciation and that is a knurl-style zoom knob. This knob is kept adequately loose such that it neither moves accidentally nor is too stubborn to turn.

Being an SFP scope but exhibiting the characteristics of FFP is really one of its kind. Besides this, the BDC reticle can be changed to any style from the given eleven settings. The fog-free, waterproof, and shockproof construction shows it will be a good choice for rainy or cloudy weather.

Almost everybody who bought it seemed to be content with it. A little group of users complained about the unavailability of tight pop-up caps. They further added that they were able to overlook this because of the crystal-clear 8x zoom. All in all, people appreciated the credibility and features of this scope.

Around the objective lens, there is sort of a shaded boundary, which is called TactEdge angled integral sunshade. The purpose of this shade is to prevent a sudden burst of light from entering the scope. In this way, a sufficient and harmless amount of light reaches the lens, making it suitable for a sunny day.

All the mounting accessories required for this SFP 1-8x scope are provided with the package. Hence, you don’t have to buy anything separately.

Etched glass is already a symbol of ever-lasting finish. To top it off, thick emerald coating prolongs its lifespan and strengthens its anti-glare properties. It is due to the superior quality of the glass that an equally unobscured view is obtained on both lowest to highest zoom powers.

36-color mode became the center of attraction for most customers. Also, the lock setting won their hearts. All the buyers encouraged others to buy this scope for making their hunting rifles more opportunistic. Whether it’s an avid hunter or a professional one, the scope successfully fulfilled everybody’s requirements.

There are two reasons for including this scope on our list, one of which is etched glass. A rich emerald coating is applied to its lens, which enhances its clarity and provides a fog-free view when the user looks through it.

The next is the variable color mode. The basic mode consists of RGB color settings, while the advanced mode exhibits the reticle in thirty-six different colors, thereby allowing it to appear unique in all light conditions. Also, switching between RGB colors is ensured just at the push of two buttons. And for converting to 36-color mode, just keep the button pressed for a second; that’s how easy it is.

Beginners or less experienced hunters should try this scope as it performs exactly like a professional hunter’s scope, but in a more user-oriented way. Easy-to-use functions, color settings, and zero lock mechanisms are some of its extraordinary capabilities. 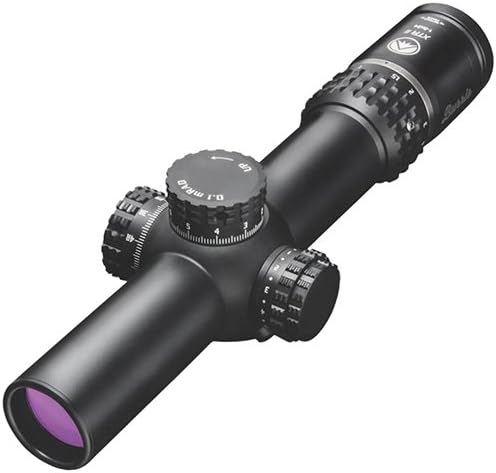 This 1-8x scope includes true 1x and 8x powers, along with 1/10 MIL, versatile windage and elevation options, all being sensitive to your instructions. The intelligently prepared glass features prominent reticles in the shape of a ballistic circle dot. Now, manipulating zoom powers is hassle-free and very convenient to use.

The field of view that it offers is broader than many high-end scopes. For the 1x setting, the field of view is 105°, and it’s 12.45° at 8x zoom. This first focal plane scope has an improved ‘zero stop’ feature that mainly helps its users to sight in the scope.

Not every scope offers a wide view angle at 1x. But this scope is skilled at magnifying objects while including a wide portion of the scene in the view, without any blurriness. Moreover, its zero stop enables the user to sight in and shoot the target at ease.

Every scope, whether it is 1-4x, 1-6x, or 1-8x, owns different characteristics. The difference in characteristics is what diversifies the purpose and functionality of scopes. So, in this article, we will discuss the similarities and differences between the two scopes.

Let’s have a look at similar features of the two. The lowest possible zoom offered by these scopes is 1x. Hence, the size of the object witnessed at 1x will be the same for both scopes.

Now, go through the list of differences proposed by these scopes.

Since an 8x scope’s magnifying potential is more than a 6x scope, its view will be 33% larger than that of the 6x scopes.

An 8x scope provides a clearer and magnified image of the scene or objects you are aiming at. Thus, its shooting range can be as far as 1000 yards. Meanwhile, a 6x scope can do the job for only 400 yards or a little more.

If we consider the area of the scene captured by the magnifying lens, then both scopes are found to show a noticeable difference. 8x scope is known for covering a larger field area at all zoom powers as compared to a 6x scope.

Qualities like crystal-clear views, zero locks, RGB and multi-color reticles, user-friendly design, wide view angles, fog-proof glass, water-resistance, and high-quality build are what every hunter and sniper admires and aspires to have in his rifle scope. You will be glad to know that the scopes included in our review have all these features in them.