This article will outline a few popular methods that any gun owner can use to properly remove rust from their gun without damaging its surface.

Whether you’re taking on a heavily rusted restoration project, or just cleaning some trouble spots on one of your regulars, knowing how to prevent and remove rust from a gun is a skill that every gun owner should possess.

Though we often consider rust to be the result of poorly sustained metal, the dull, burnt orange color that we've come to know as a telltale sign of metal degradation is actually a natural, unavoidable chemical process.

Rust, or Iron Oxide, can be broadly described as the end result of both corrosion, a process in which materials naturally degrade towards a stable chemical state, and oxidation, which describes the tendency for unprotected Iron to lose electrons to introduced oxygen molecules in the air and water.

Rust can then be summarized as the direct result of these two processes working in combination, as the positively charged Iron naturally attracts the negatively charged Oxygen molecules (corrosion), which then strips the Iron of its electrons. The net loss of electrons and deteriorated metallic bonds results in the formation of rust at the location of contact between the Iron surface and Oxygen.

How to Remove Rust From Gun - 4 Simple Methods

Removing rust from a gun can be a frustrating process if not done correctly. Each of the following four methods will make cleaning your gun a relatively simple process, though some may be a bit more labor-intensive than others.

Arguably the most popular method of removing Iron Oxide from the surface of a firearm is to use an abrasive like steel wool. Generally speaking, the easiest way to remove rust is through good old fashioned scrubbing. The trick with using abrasives is to find one that is hard enough to be able to scrape off the rust with relative ease, but less hard than the underlying gunmetal, so it won’t damage the surface of the gun in the cleaning process. 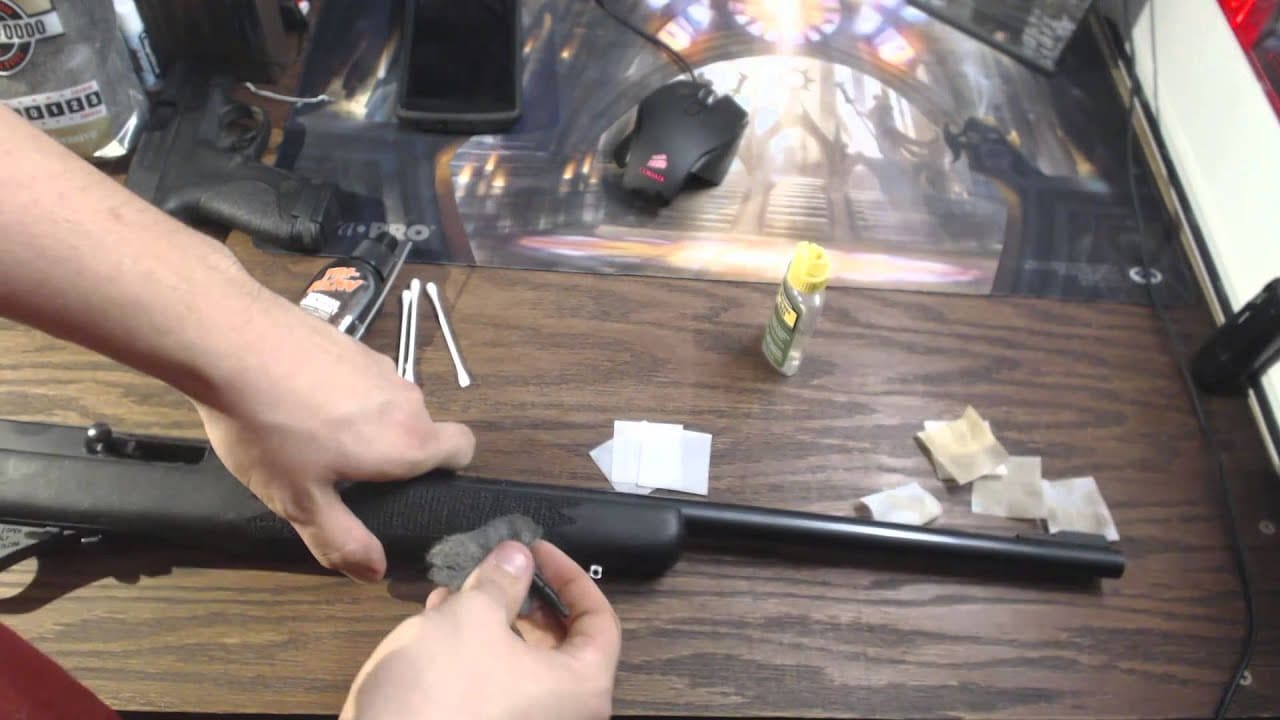 When using an abrasive, cleaning is fairly straightforward. Make sure the firearm is in a stable position, and use the abrasive to brush away the rust. It is also recommended to keep a dry cloth close by that can be used to brush away remnant rust particles.

In reality, the only major downside to this method is the hard-scrubbing work required, but it is important to remember that abrasives can do some major damage to the surface of a firearm if they are too hard, so be sure to choose the best type of abrasive for the gun. If steel wool is too hard, perhaps look to a copper brush/pad instead.

Another, alternative method to consider for particularly heavy rust cleaning involves the use of gun oil. This method is essentially the same as the abrasive method above, though it introduces the use of gun oil as an extra cleaning agent. Basically, when gun oil is applied in small amounts (no need to be too liberal here), it helps to soften and break up rust even before the abrasive material is used.

The use of oil can work wonders on gun rust, though there are some considerable drawbacks that many gun owners will be quick to point out. Specifically, there are a number of people out there who suggest that oil works almost too well with cleaning rust, as the introduction of oil encourages the oxidized surface to break up into tiny particles that can end up damaging the surface of the gun when wiping it down. With that said, many cite gun oil as an absolute must in the cleaning process, and its ability to cut through rust is undeniable; just be sure to weigh your options before beginning a cleaning project.

3. Using a Battery Changer as a Gun Rust Remover

Though much more expensive (in terms of startup costs) than the previous methods, using a battery charger can be a simple way to clean rust from a firearm that requires little to no physical effort. To use a battery charger as a rust removal agent, one must first create an alkaline bath in which the covered gun will be submerged. To do this, all you need to do is find a bucket, and create a water-based solution that’s about 1 tablespoon of washing soda (NOT baking soda) per gallon of water. 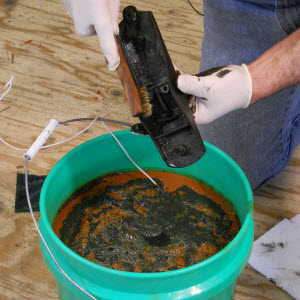 After you’ve done this, you’ll need to craft a holding apparatus for the conductive rebar that will be submerged beside the firearm. To do this, most attach the rebar in multiple locations along the outside of the bucket, though it can also be suspended from a wood plank that is laid atop the bucket.

Once the rebar is in place, you will attach the battery to the cleaning bath by attaching the positive, red wire clamp to the rebar (the clamp can be submerged), and the negative wire to the firearm being cleaned. Be sure that the battery is off when attaching each wire.

Once you’ve successfully attached each of the clamps, you’ll then turn the battery on to a relatively low setting (e.g. 6 volts), and watch the rust slowly start to fall off the firearm and dirty the water. For a clearer, step by step walkthrough on this process, see https://www.instructables.com/id/Electrolytic-Rust-Removal-aka-Magic/

Another alternative method to remove rust from a gun is to use WD-40 alongside an abrasive agent. The application of WD-40 acts similarly to the oil-based method described above, but has the bonus function of a preventative agent, meaning it will not only clean the surface of the gun but will also offer short term protection against rust formation in the future. 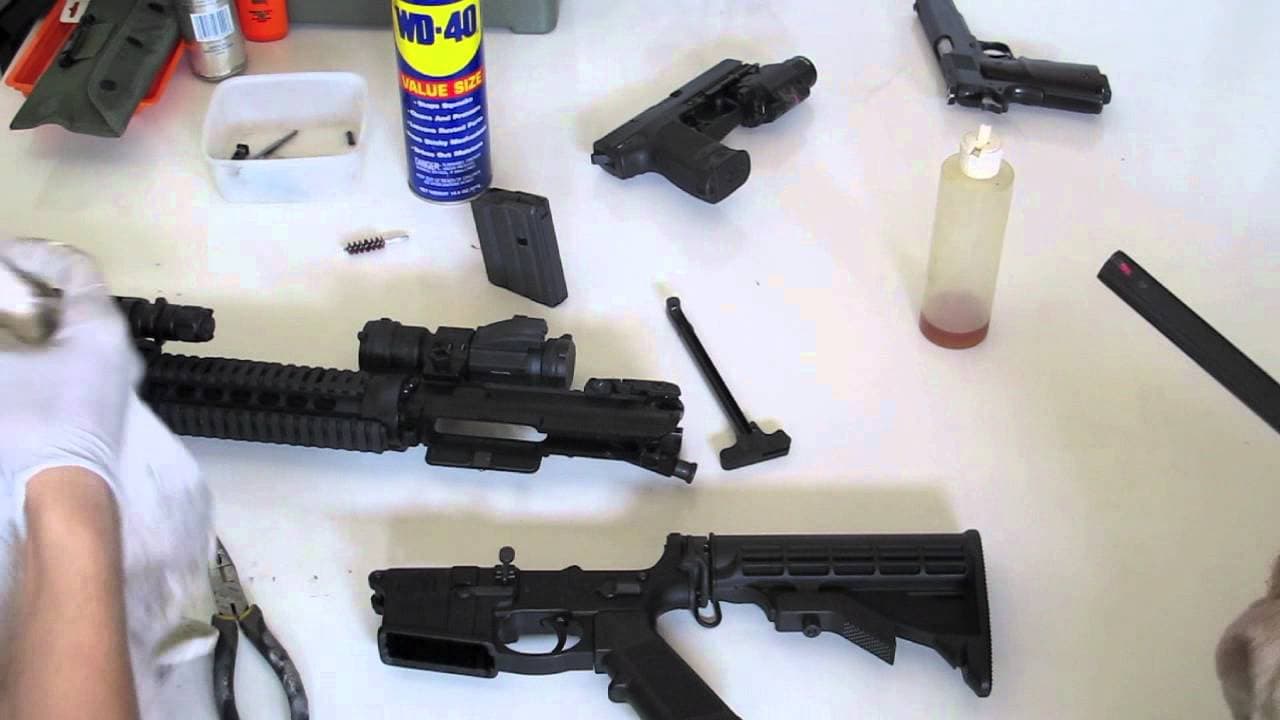 Just like most of these techniques, this particular strategy is fairly straightforward: apply liberal amounts of WD-40 to the surface of the firearm, and use a semi-hard abrasive material to scrub the rust away. Again, be sure to have a dry rag nearby to wipe away excess liquid and rust remnants.

Though the classic rust removal approach may work just fine for light rust cleaning, nobody wants to blow their arm out scrubbing an old, rust-covered gun. For these types of heavy rust cleaning projects, nothing works better than a simple, labor-free rust removal bath. As seen in the video below, products like Metal Reserve Rust Remover Bath do they work of cleaning for you, producing a shiny clean surface on even the most rusted parts of an old gun.

For this cleaning method, and any other, the first step is always to remove any accessories and disassemble the gun  you’ll be cleaning, and give the pieces a light wipe down to ensure that you’ve rid them of excess dirt or grease. After the gun has been taken apart, your work is done. Simply place each of the individual pieces into a plastic bowl or PVC pipe, cover it with the rust remover bath, and let it sit.

Really, the most arduous part of this process is simply waiting for the bath to do its work, as the H&R Model 1908 Single Barrel Shotgun seen in the video took 18 hours to be stripped of its rust! Once you’ve done your waiting, and the gun is rust-free, all that’s left to do is give it a wipe down with a dry rag, and apply a preventative spray to ensure that it doesn’t rust any time soon.

It is worth noting, as pointed out in the video, that Metal Reserve Rust Remover Bath is safe to use with plastic, wood, and metal, so there’s no need to worry about damaging a wooden handle or even the bowl used to hold the liquid. However, as recommended for any product you’d use to clean a gun, make sure that this particular rust remover is compatible with any particular gun: Metal Reserve Rust Remover will completely strip away gun bluing and oxide coatings.

Preventative Maintenance - How to Keep Rust From Forming

The best way to avoid rust related issues is to prevent its formation in the first place. Here are some tried and true methods used to help prevent any gun from rusting.

Store Guns in a Dry Environment

For rust to develop, the metal needs to be exposed to a considerable amount of moisture. To avoid this, make sure that guns are stored in a dry area, free from any water or moist air. Try placing silica packets in and around the storage area to minimize moisture.

The best rule of thumb for firearm upkeep is to keep them as clean as possible. Using a sling keeps the weapon from getting dirty on the ground or sitting in unclean places when not in use. Regular cleaning can prevent rust and a number of other, use-related issues from occurring, and should be a standard part of any gun-owners routine. Ideally, a gun should be cleaned after every use, though we’d recommend cleaning it at least once every three uses.

Use a Preventative Agent

There exist many different products that claim to provide gunmetal with protection from rust. In reality, each of these products will provide a varying level of protection against rust formation, with some providing minimal, if any protection, and some providing long term prevention. While the right preventative agent can be a valuable product to use on a gun, it should be noted that regular cleaning and dry storage are still a necessary step to avoid any chance of rust formation.

Though one hopes to never have to clean rust from their own gun, knowing how to properly remove Iron Oxide from the surface of a firearm is a useful skill to have. Whether you plan on restoring an old gun or cleaning up one of your own, the various methods of rust removal highlighted above will have your gun as shiny as ever.

Whether you choose to use a rust removal bath, battery charger, or any type of abrasive method, you should always remember to disassemble the gun and wipe off any excess grease or dirt prior to cleaning.

Scroll back to top